With so many people picking up cycling lately, I thought I'd write up the resources that I've found over the years that have helped me. When I started I was following poor routes and getting frustrated, but I found a bunch of resources that made route planning a lot easier, and a lot less stressful.

Cycling is a great way to exercise while physically distancing from others.

It's a lot easier if you're not trying to figure these routes out from first principles: here's my list of recommended resources.

This is a City of Sydney government organisation to help riders. They often have free tune-up events.

I recommend getting a Bicycle NSW membership, if only for the cycling insurance coverage, but also because they do a decent amount of lobbying and education — for example, they worked with NSW Police to make a training video about enforcing minimum-passing distance laws.

Bicycle NSW maintains an index of NSW Bicycle User Groups. Perhaps there's one near you?

I'd suggest not starting with Google Maps bicycle routing: it biases too much in favor of faster, busier roads when new cyclists would be better using quieter backstreets.

Most chatbots don't make good use of the format, but the SydneyCycleways chatbot is actually fantastic. I use this first whenever looking for how to get to a new location in town.

Add them on Facebook Messenger, tap "route advice", and then say "x to y" and they'll give you a route that emphasises flatness, bike lanes, and quiet back streets.

I've referred multiple friends to use this, and they always remark how good the routes found are.

Best to also install "RideWithGPS" App to look at the route you've been given.

You get two alternate route suggestions back: here's number 1. Looks good, sneaking through Centennial park and the Bourke St and Kent St cycleways. 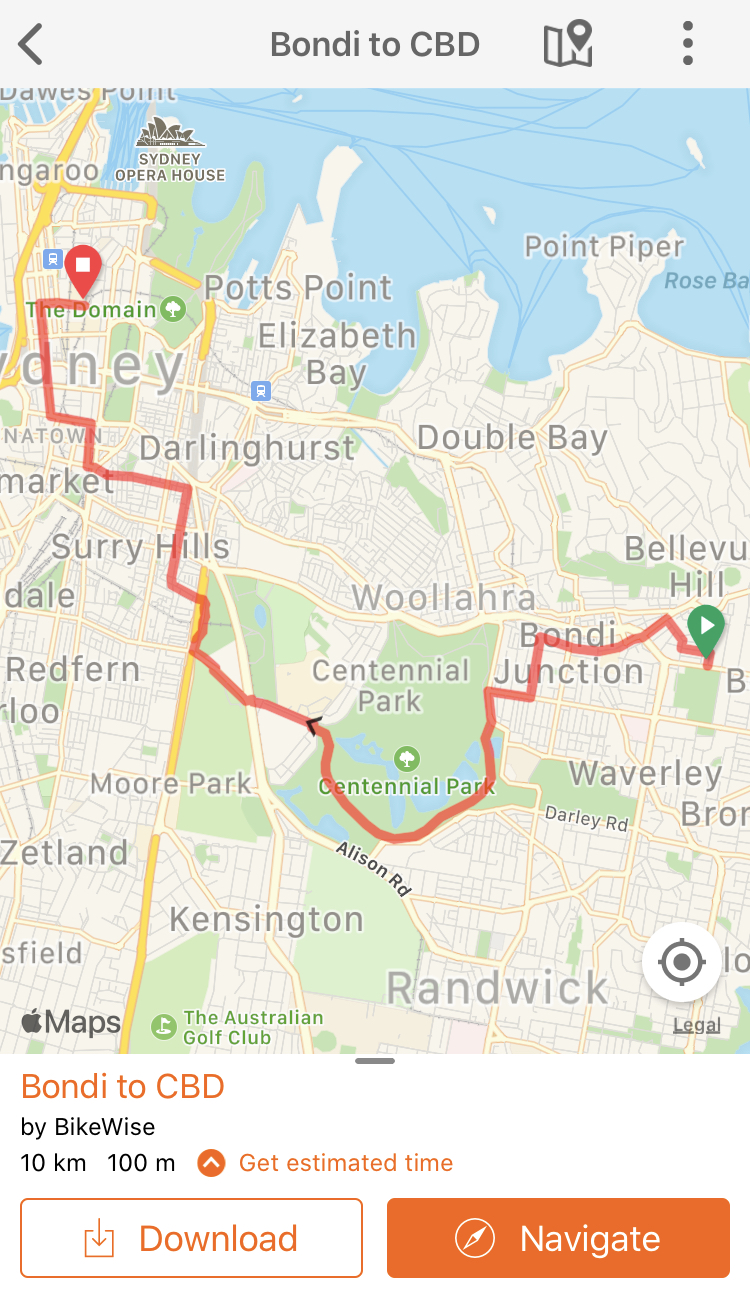 If the chatbot interface is frustrating, you can see that the routes are by "BikeWise", a cycle training and consulting organisation, and all the routes are listed at their Ride With GPS Routes Page. Looking at the timestamps, they're all made early 2018, so some may be out of date where new cycleways exist.

Here's a trick I found while researching this post: open BikeWise's Routes Page, sort by Route Name, and scroll to your suburb: you can see all the routes they have from your suburb. Lots of great ideas for your next ride! 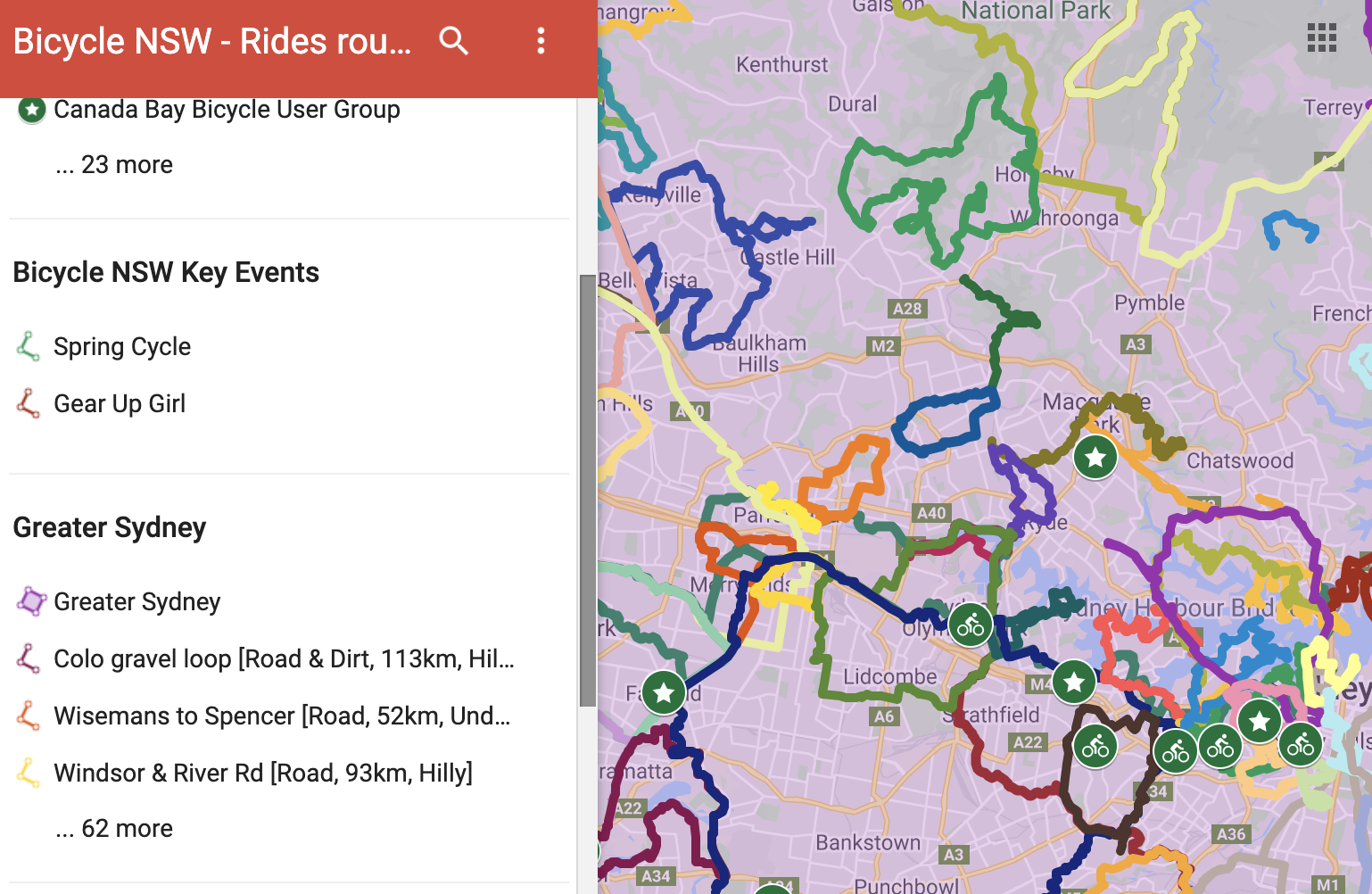 This has great coverage across NSW, linking up maps provided by local Bicycle User Groups. You can open this on your phone and star the map into Google Maps, so you can find it later. Not just "from A to B", this map includes many recreational loops. 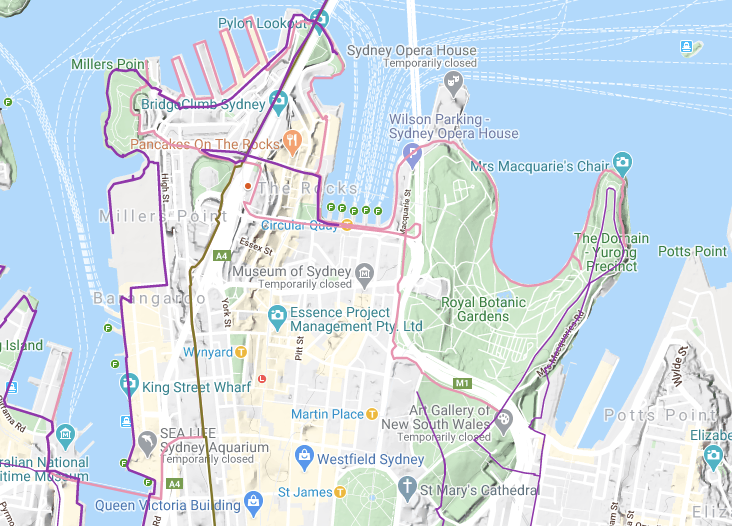 The BikeTrail.info blog is fantastic. The author maintains a Sydney cycle route map, and an Australia-wide cycle route map. (other maps). There's a neat little community on BikeTrail.info's Facebook page too. I really appreciate how the map is annotated with frank assessments of the state and difficulty of each trail. 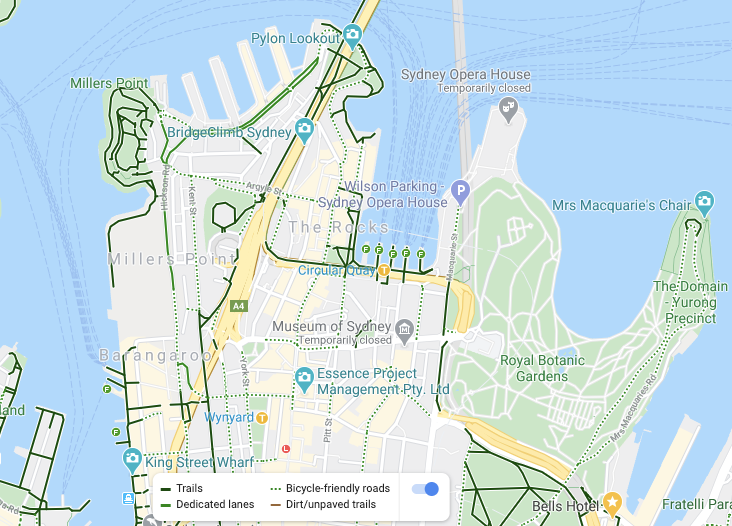 Google Maps' routing could use some work, but their cycle layer is great.

It's not perfect, but it has coverage almost everywhere. There's a subtle color difference between 'Trails' (dark green) and dedicated lanes (light green) and bike-friendly-roads (dotted).

This categorisation is often not useful too: "dedicated lanes" end up being door-zone bike lanes all too often, and 'bicycle routes' are often just busy roads marked with bicycle Share Arrows ("sharrows").

Errors abound, but there's the opportunity to fix them for everyone: long-tap the road, select "Report a problem", Tick "Incorrectly drawn", and explain how the road is showing up incorrectly on the cycle layer in the free text field. 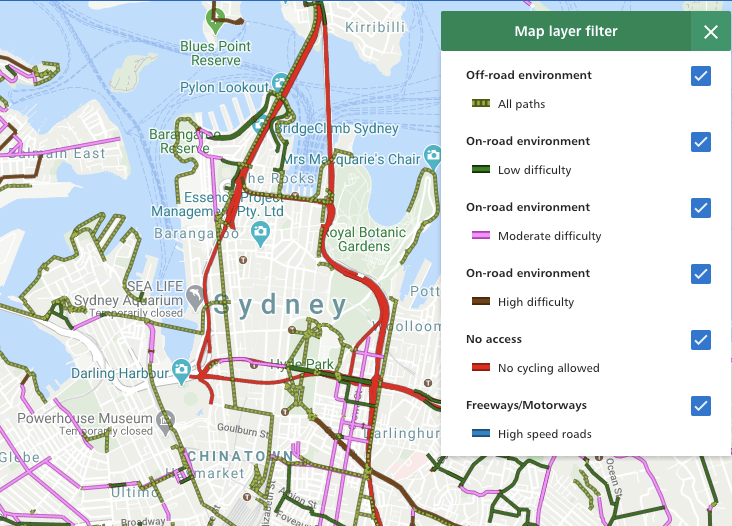 Run by NSW government's roads agency. Has coverage across NSW, and separates paths thoughtfully into categories by difficulty. A shame there's no mobile app. 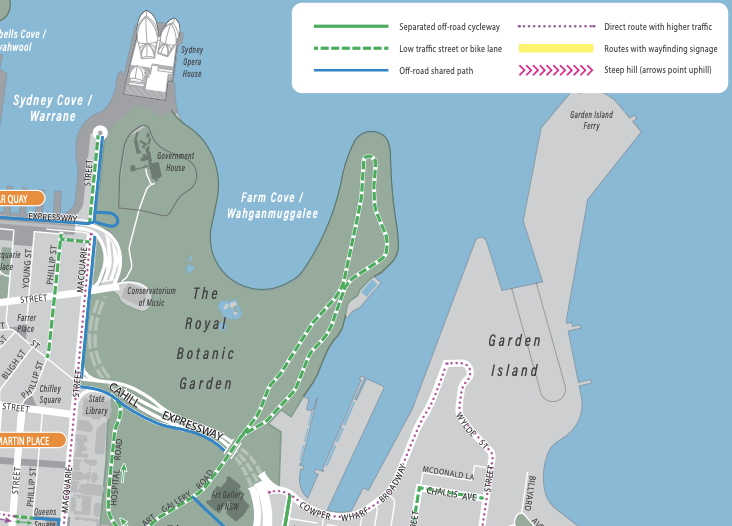 This is good to have in your back pocket if you're in Sydney's inner suburbs. You can view online or order a paper map sent free to your home. I particularly enjoy how they mark out the direct routes with higher traffic vs the quieter routes. 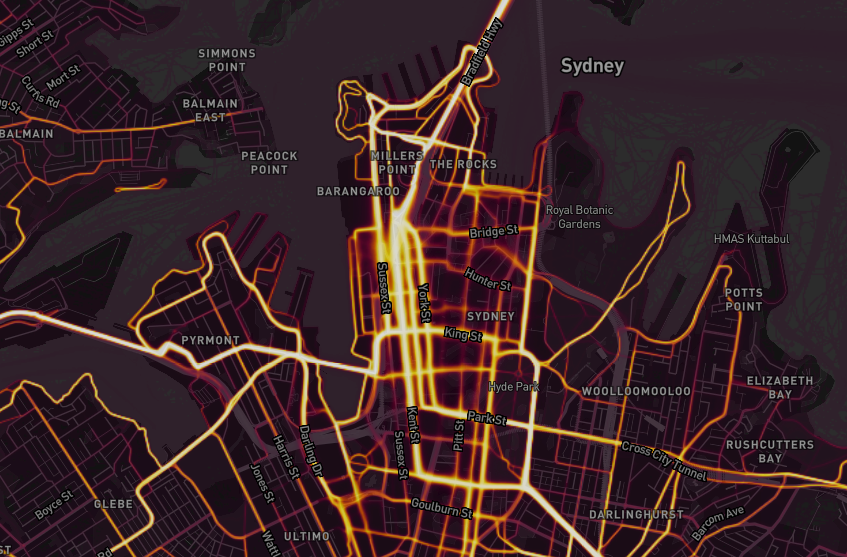 Strava, a workout-sharing social network, provides a global heatmap of which roads are used most by their users. A free Strava login is required to zoom in to detailed streets.

This isa great resource for the "ground truth" of which roads cyclists use. Strava can answer where cyclists in practice go, even if "official" maps say to use a different route.

I've found Strava's heatmaps particularly useful when I'm in unfamiliar towns, or places that don't have an official map. I've used Strava's map planning routes in regional NSW and overseas. It's most useful as a tiebreak between two bad options on the official maps: when it looks like I have only bad route options, Strava can show which route is more popular, breaking the tie.

Strava heatmaps probably wouldn't be the first tool I reach for, but it's a useful one to know about.

Other resources I haven't used yet

Get connected with the cycling community in Sydney - it's far easier than figuring this stuff out on your own! Start off on quiet backstreets using these maps, and you'll have an easier time getting started.