This is pretty weird! I'm writing this up in case others are struggling with this, so something comes up when they Google what's wrong.

The TP-Link Archer VR1600v Modem Router seems to double my latency pinging Sydney sites from 6-8ms to 12-16ms compared with my previous Huawei HG630 Gateway. This is quite the regression from replacing routers!

And I've got the Prometheus/Grafana monitoring to prove it! This is the ping time to various Sydney-based points-of-presence, and some of my ISP's servers.

Note how it's weirdly bimodal with the VR1600v, going from min 12ms to min 14ms ping. I can't explain that.

Not just one bad device

This doubling in ping time reproduces across two different physical VR1600v devices - I had issues with the first one I bought off eBay (it was tied to someone else's account on TPG's servers and kept re-provisioning me with a bandwidth limit) so TPG sent me another one. So it's a bit of a fluke that I was able to test with both, and conclude that it's probably a problem with the model rather than the specific device.

I first noticed this running speed tests, thinking that's weird that the ping has increased with the new router. Then I jumped to mtr, which is my favorite networking tool, combining traceroute with ping, to see at which hop of the route the latency was increasing

Here's a picture of mtr pinging all the hops to a Sydney site via the VR1600v, after 37 rounds:

Looking at the Best column, you can see that it starts off with very low ping to my home WiFi, 0.3ms, then increases immediately to 13ms on the second hop (this is the handoff to TPG, my ISP), then stays flat.

This tells me the problem is between my home WiFi and the first hop of the ISP. What's sitting between those two? The VR1600v gateway. It could possibly be the termination at the TPG end, but that seems unlikely, given that the latency is low for my old HG630 gateway (unless there's some slow-path configured for the VR1600v? again, could happen, but seems unlikely).

I don't know what's causing this increase. My first guess was perhaps the firewall is doing deep packet inspection and that's slowing things down. But I turned off the firewall on the device, rebooted, and it made no difference to ping time. Most likely I think it's just a bad router model.

In the meantime, I've reverted back to my venerable HG630. I was a bit worried about running a 5+ year old router that's not receiving security updates any more, but it's in bridging mode, so it's hopefully not even looking at the data going through it, simply passing on all the data to my Wi-Fi router, which is getting security updates.

I'm reporting this to TPG, in the hopes they'll be able to figure out what's going on, or if it's unfixable (seems likely - I don't think TP-Link will be providing much support), to investigate supplying a different router to customers.

It might just be me having these problems, but that seems unlikely given I've reproduced it across two physical devices.

I hear this router is used by other Australian ISPs - they should look into this too. 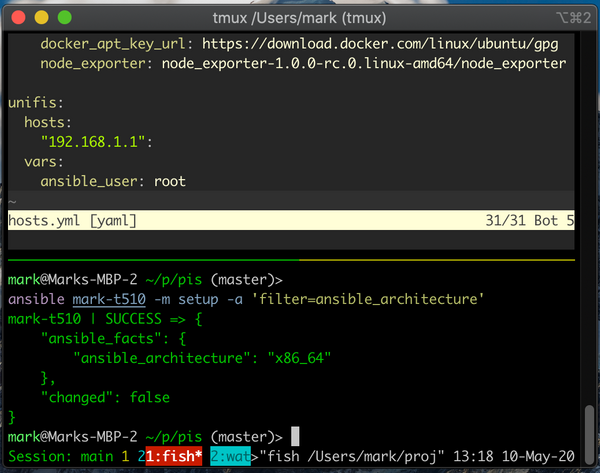 I run a bunch of software on my Macbook. I'd like to keep that software up to date and patched, so it doesn't have security vulnerabilities. Trouble is, I install it from lots of places: Random websites (for the most part)Homebrew (for most