Before travelling to Cambodia, I wanted to learn a bit about their recent history - what happened during the Khmer Rouge regime. This book was highly recommended as a memoir of someone who lived through those years.

1975: The Khmer Rouge take over. Families are separated, forced out of the city to work the farms. Estimates range, but at least 1.5 million were killed through executions, forced labour, or simply starved in the famine. Four years later, Vietnam invades, and ends the regime. 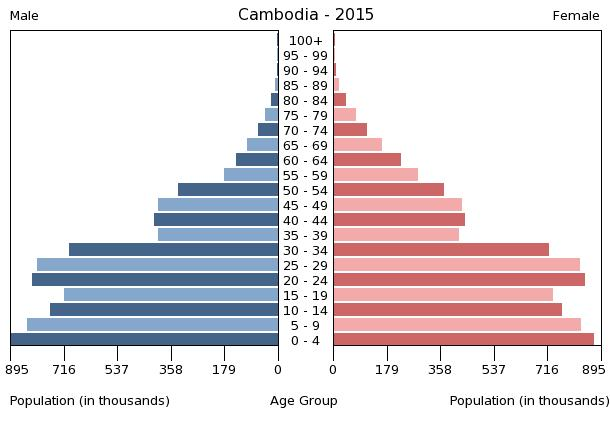 We can understand at an abstract level that the gap in this demographic pyramid represents a lot of suffering - children dying, years where people are too starved, overworked to bear children or produce milk.

The statistics are too abstract. They don't hit you the same way as does following the story of the suffering of one family, and hearing the details of how they tried to survive.

I'll give a short list of moments that stand out from the book:

And that's just a quick smattering. There's many more details, and it's the details that gets you.

It's a heck of a page-turner. Short chapters are dense with story. Months and years of famine and backbreaking labour are fast-forwarded, leaving a very slim, dense book, which zooms in on specific incidents.

There's moments where people are taken away by soldiers, presumably to be killed in mass graves, but the family never learns what happens. During these moments, Loung's imagination takes flight, and she describes imagined scenes of the executions. They're some of the most poignant moments of the book - the sadness of a daughter grappling with never getting closure - never knowing the fate of her family members.

The book is told and narrated from the perspective of a 5 year old girl. We learn about the Khmer Rouge through Loung's father's explanations to his daughter. Events are seen through 5-year-old eyes.

Root causes are hardly considered, outcomes not critiqued. The book begs the question, how do we stop this from happening again?

What can we do?

It's relevant today. Similar stories are unfolding now in South Sudan and Myanmar. But they're more-or-less off the radar, hardly anybody's noticing.

There's a debate going on today about the viability of 'regime change' after the recent debacles of US intervention in the Middle East. Armed invasion eventually deposed the Khmer Rouge, but it was hardly a panacea - it kicked off almost 13 years of civil war.

I recommend the book, for anyone visiting Cambodia, or interested in hearing the details of one of the worst atrocities of recent years. It wasn't that long ago.